Yeah – blog writing has kind of taken over these past 18 months, so I thought maybe I should prepare a wee update on my book projects … just in case anyone was even remotely interested.

After a completely unproductive year with a publisher (who really did ‘jack’ ) and handing out free copies for review (none!) I’ve now taken back control of my old DAMP DOGS & RABBIT WEE.

Just to prove a point, I’ve re-published it this week and sold several Kindle copies in USA in the past couple of days. I’ve also placed it back on Amazon UK at the much more sensible price of £6 for the next few weeks (regular price £7) which makes it ideal for a Christmas stocking stuffer.

Kindle editions are only £1.99. Link in the Comments section below.

(The publisher had priced these at the ridiculously high £11.99 and £8.99 respectively, if I recall correctly.)

These past few months, I’ve consolidated about seven different versions of my first light-hearted fantasy novel, and am now about 90 pages in and due to re-start writing after my current project.

This is another dog related, short book to be released on Kindle only, with some photos. Again, nothing too serious, but a light look at the beach dogs / stray village dogs in Goa, India. The working title is ‘GIVE THE DOG A GOAN -the heart-warming charm of India’s homeless dogs.‘

I’ve been sent amusing, charming, sad and frightening accounts of encounters of these dogs from all over the place. I just have to work the balance between it being funny and poignant.

I also have two more ideas I’m working on, as well as the blogs, so it looks like a busy winter ahead.

Thanks for reading – and remember, if you’d like to help show a publisher how easy it is to sell books, then please visit the Amazon link below.

THIS WAS WRITTEN ON RETURN FROM HOLIDAY IN JANUARY 2018.

So, another adventure in Goa, India draws  to a close.

‘Adventure?’ Perhaps that’s an exaggeration. The word prompts thoughts of conquering the unknown; of searching out new experiences, or even perhaps legging it with an ancient relic tucked under your sweaty armpit whilst evading a multitude of jaggy-edged booby- traps, set by the Guardians of the Dead to a previously unknown civilisation.

In actual fact, the most exciting and adventurous thing I did, was bare my arse to a hitherto unknown Indian chap who promptly thrust an anti-biotic laden needle into the muscle mass of my glutes.

Being unwell on holiday is … well, a complete bummer.

Never-the-less, if you are going to be ravaged by a mucus-soaked chest infection, Goa is the place to be. You may well feel like shit, but you certainly won’t feel out of place since it seems every taxi driver you hire is partial to the odd roar of gargling phlegm.

And, on the plus side, should you fall victim to ill health, appropriate medication is easily had in the local village at the the rather decrepit looking pharmacy. And for a mere fraction of the price you’d pay in England, too.

Of course, with free prescriptions in Scotland, us Scots are outraged at having to pay 325/- (@ £4.22) for enough amoxicillin, levobalt, paracetamol, & cough syrup to undercut a chain-smoking Venezuelan drugs baron.

Most Goans speak English as well as their native Konkan, but the most effective means of conveying your illness to the dispenser, is to demonstrate your ailments. A simple cough, protruding your tongue or tearing slices of dead skin from you sunburnt forehead usually results in the grumpy, wizened old pharmacist scampering up an unstable ladder to reach the outer limits of his stock.

I will never fathom how he knows where to find a specific unbranded white box of drugs, incidentally each of whose name comprises a minimum sixteen letters and sounds like a Polish shot putter’s under arm deodorant . But he does, & that’s all that matters.

A word of caution though: active demonstration of Delhi Belly is to be discouraged. It’s considered rude and unnecessary in these parts, and rather than meds, you are only likely to be handed a shovel.

BUT THAT’S ALL BY THE BY.

Goa is a colourful and magical place. The Heritage Village Club at Arossim, its staff and guests, even more so. Nothing is too much trouble, and even though I effectively lost over half my fortnight holiday through feeling unwell, it was heartening to see how concerned and attentive the staff ( & fellow guests) were.

I thank you all. It’s been a pleasure spending the past two weeks with you. I will, of course, completely understand you not reciprocating the sentiment if come Tuesday, your wheezing lungs are similarly filled with green, sticky stuff.

So that’s it – I’m home in Scotland now. And still coughing.

Right now, though, I’m going to get some shut-eye. For tomorrow morning means an early start as I’ll be straight off down to Boots the Chemist, dropping my kecks and demanding a free jag in the bum. 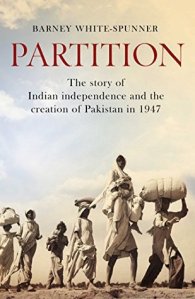 I have visited a small corner of the country on nine occasions (Goa and Karnataka) and have made many friends, Hindu and Muslim as well as Christian. Not that religion is of any consequence to me, but it DID play a massive part in the Partition process of 1947.

And so, when this book was published year or so back, I felt compelled to buy it and read up on WHY India is as it it today.

Now, I KNOW the subject of Partition is a complex one, involving a great many people, but I just found the book TOO mired in the names of the key personalities. And I’m an impatient / lazy reader, I guess, so continuously reading long Indian names kind of put me off. Twice i tried. I rested a while and tried to pick up again from page #120, but just struggled to get into it.

I’ll shortly try to read up on this mega event that has shaped the world, as I genuinely want to understand. But maybe I need to do so via the means of a more narrative book, such as ‘The Lives of Others,’ by Neel Mukhergee.

I never was any good at History at school – perhaps this is why.