HOW MUCH DO YOU WANT IT?

As football fans, each and every one of us wants our club to be successful. That’s the whole point of sport, right? To win. Unless of course your name happens to be Claude ‘Lefty’ Williams, the three-game losing pitcher for the infamous Chicago White Sox (subsequently referred to as the Black Sox) in the 1919 World Series.

But what price, success? How much do you crave it?

Let me ask you this: why do you support Renfrew FC? Or Pollok FC? Why not Celtic? They have obviously been the most successful team in the country for a good few years now.

Aside from the obvious extortionate cost of watching senior football these days, I’d suggest it’s because we find the honest challenge of hoping to win, more exciting than the rather boring expectation of victory; an expectation that of course inevitably results in occasional disappointment.

For that’s the change in dynamic when a sugar-daddy appears on the scene, or a club over-extends on its ambitions.

This summer has seen many clubs leave the Junior ranks for the perceived greener fields of the Senior leagues. And good luck to them – ambition shouldn’t be knocked. Realistically, this won’t affect, in the short term at least, the fabric of the clubs or their relationship with their fans. They may indeed recruit more much-needed support through the turnstiles.

But further down the line, will the clubs’ traditional identity be affected? Will the relationship with their hard-core, long-standing and very possibly long-suffering fans become diluted?

I believe that the majority of football fans still long for sporting romance, team character and as much as anything, surprise when attending matches. Why else would neutrals nearly always root for the underdog? I cite the case of Leicester City a couple of seasons ago. Or even Wigan Athletic’s FA Cup triumph a few years before that.

Speaking of which – when I was a kid, my English team (we all had one, didn’t we?) was Manchester City. I really don’t know why. It was probably the constant pictures of Colin Bell, Frannie Lee and Mike Summerbee appearing in the pages of ‘Shoot!’ Magazine. That and, an obstinate streak combined with desire to be ‘different,’ that made me eschew the accepted norm of United being THE team to support.

So, when in the mid-eighties I moved to Manchester for work, it was an easy decision as to which team I’d follow. 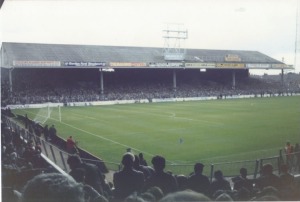 But I enjoyed my Saturday afternoons there as I went in the knowledge that the only expectancy was defeat and despondency. A win or even a score draw, and my Saturday night was made.

And not only Maine Road. Edgeley Park, Stockport County’s ground was only three miles from my house. At the time, they played their home matches on a Friday evening and so when not out drinking with my workmates, I could frequently be found cutting a lonely figure on the old Popular Side.

In those days, both Clubs had a marvelous one-to-one relationship with their fans. And for a while after I moved back to Scotland in 1989, they both kept in touch – by letter of course. City’s secretary would occasionally mention me in the match programme, and County’s manager of the mid-nineties, Dave Jones, would send me batches of programmes now and again.

Nowadays, of course, things have changed dramatically for both Clubs.

County had progressed up the leagues and narrowly missed the playoffs to the Premiership in 1995/96. In the same season they famously reached the semi-final of the League Cup before surrendering a first leg victory and subsequent Cup Final place to Middlesbrough in the second game.

From then, it’s basically been a downward spiral, though they have managed to stop the rot with a five year spell in The National League North – effectively the sixth division in England.

City on the other hand transformed in the opposite direction, and after a spell ‘Down Among The Dead Men,’ of the third tier, found themselves that sugar daddy and well, you know the rest. 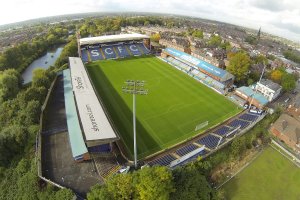 But here’s the thing: I would never deny my love for City, but these days I take more of an active interest in what’s going on down Hardcastle Road, in SK3. I buy the shirt; I subscribe to live match commentary; I watch the You Tube videos and I drink from a Vernon Bear coffee mug!  Proof, I think, of my earlier point.

Yes, success is wonderful, something to celebrate. Perpetual success, though also to be celebrated, is, I’d say, of more value to supporters who want petty bragging rights over rivals. But at the cost of excitement, romance and character.

So me? Renfrew FC? I have no particular desire to see my Club rise through the senior levels; I have no great craving for a lottery winner or Arab prince to throw millions at the Club.

No. I’ll happily settle for consolidation in this league … and a win in the Scottish Cup.

This is my first programme article of the season, and I feel I should probably apologise for the quality of content. See, in order to meet the editor’s stringent deadline, I have been forced to write this page while suffering an almighty hangover.

It must have been about 2am when I staggered back down my street after yet another summer party night.  And then, at eight this morning I was rudely awakened by the sound of my neighbour mowing his lawn!

I lifted my head and was about to let rip and give him a piece of my hungover mind… then I thought, ‘sod it, he can just mow around me.’